It’s been many years (decades) since I’ve read a pirate book, and in those days it would not have been faith based.

I wondered as I started reading this how the world of piracy could jive with a Christian worldview.  Ms Y’Barbo did so by explaining the world of privateers and how they differed from pirates.  The hero, Jean-Luc, is a privateer.

Maribel is the last in a long matriarchal line of Mary’s.  We first encounter her as an 11-year-old girl who, along with her father, is a passenger on a “pirate” vessel in April of 1724.  She is a free spirit and loves the experience so much that the captain, Jean-Luc, grants her an honorary position on the ship as the lookout.  This requires her to climb the ship’s mast where she can spend her days lost in her favorite past-time, reading anything she can get her hands on, particularly books about pirates.

She is only on the ship a short time before it encounters enemies and is destroyed.  Everyone except Maribel and a couple of the ship’s hands are assumed lost as sea.  Maribel is deposited on an island in Caribbean inhabited by nuns and orphans.  She is raised by the nuns and upon reaching adulthood becomes a fellow teacher to the orphans.  She spends her spare time high up in trees enjoying her favorite past-time while trying to evade the all-seeing eye of the Mother Superior.

Eventually it comes to light that she is not at all an orphan as her mother and paternal grandfather, who have been searching for her for years, find her.  To be nearer the search, they had moved from Spain to New Orleans where Maribel is eventually reunited with them.  She is also reunited with Jean-Luc who is now a respectable man of 35.

Maribel’s mother and grandfather are having financial difficulties, and Jean-Luc’s family is able to help them.  In this process, more individuals from Maribel’s past step forward.

All loose ends, including the love affair between Jean-Luc and Maribel come to a satisfying conclusion by the end of the book.

This was a quick read, and I would have liked to see more historical detail and more interaction between the hero and heroine, but overall the story was entertaining enough that I will look for other books by this author and other books of this subgenre. 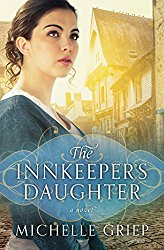 ived a complimentary copy of this book from Barbour Publishing and was under no obligation to post a review.

This is the first novel I’ve read by this author.  Now I’m going to have to look for her earlier work.  It has been many decades since I’ve read a Regency Romance (think Barbara Cartland).  What a pleasure it was to return to this sub-genre.

Ms. Griep has created a world of contrasts—good/evil, light/dark, despair/hope, unbelief/faith, and bad guys/those who seek to bring them to justice.  The book was so well written, it was many times difficult to tell into which category the secondary characters fell, and I found myself flip-flopping on cheering them on versus hoping they would hurry up and get caught.

As for the principal characters, Johanna and Alex are an intriguing pair of individuals; after they meet captivating.  The romantic element is strong and believable, and the many action sequences are paced well enough to allow the reader a chance to catch her breath in between.

There is one secondary character (or perhaps pair of characters is a better description!) who is utterly fascinating and one of those of whom it was difficult to decide whether he was a good guy or a bad guy.  There is another I hope to see in a future novel, and I’ll keep my eyes out for this.

The Christian themes of trusting God in trying circumstances and looking for the best in people despite what our senses tell us are threaded throughout the book, but this in no way diminishes from the plotline, and anyone will enjoy this book regardless of their faith status.

I am adding Michelle Griep to my list of must-read authors.